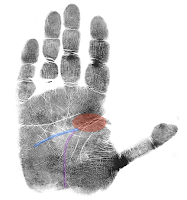 I feel Palmistry is the best predictive science next to Astrology. If you do not have correct date of birth or time of birth details, then Astrology fails to predict your future. In such a case, Palmistry will help you to know your future accurately. Here I am presenting some interesting cases taken from my Palmistry diary, which were dealt by me.

Case I: Fate makes the people rich or poor, famous or infamous.

In the hands of a young man around 22 years, I found clearly formed Ring of Solomon which is one of the rare signs in Palmistry. It represents the native came from a rich and royal family. There is a very good Sun line representing skill in a particular field. A good Mount of Mars represents interest in defense, martial arts or sports. Several horizontal lines on a good Mount of Moon represent journey to foreign countries, several times. There were two strong fate lines running parallelly in his hands representing he was a multi millionaire.

I said that he would be interested in defense, martial arts or sports and would have visited several countries already. He said he was an international player in table tennis and visited countries like USA, Germany, France and Italy for tournaments. He said that his family got their own ships and doing business world-wide. Obviously his family was very rich.

Case II: Rely on lines, not on looks.

I was traveling in a train from my native place to Visakhapatnam, along with my friend. I was clarifying some general doubts on Palmistry raised by my friend. Meanwhile, a person looking like a beggar came to us. He was lean with bony appearance and his clothes were dirty having patches allover. He bent his bald head and stretched out his hands before me. He said: “For the last half-an-hour, I was hearing your words. It seems that you are a palmist. Tell me something by seeing my hand”. I carefully observed his palms in the dull lighting and found two fate lines and other minor lines representing heavy money. I was so surprised that I could not utter any word for two minutes. Then I said, “You are a very rich person. You would have a property worth of more than one crore (10 Million) rupees.” He said, “Yes, you are right. Iam having around 2 crores worth of property.”

Once I was invited by my friend's family to see the hands of my friend's elder sister. She was a married lady having a boy of 7 years old. I saw the Life line terminated at the age of 37 in both of her palms. This represents a short life that ends at around 37. There are criss-cross lines on the lower Mount of Moon which represent abdominal problems. I enquired about her age and she said that she was running 37. I said that she was having severe abdominal or uterus related problems. They agreed and said that since her youth, that was the only problem she was facing repeatedly. I said that there was a danger to her life at 37. I said that I would suggest some remedies to the planet Moon and till then any operation to her stomach should not be done.

3 months passed and the entire family has forgotten my words. There was a match fixed for her younger sister. They thought it was better to get an operation done to their first daughter to remove the uterus, so that she would happily participate in the marriage function. They consulted a local doctor who was an expert in such operations. More over the doctor was their family friend. So the date for the operation was fixed.

On the same day, I went to their house. The family members were in a hurry to go to the hospital. I saw the lady and at once shocked for a few moments as I noticed a black transparent veil from her head to feet. Of course, that veil was not visible to others. I understood that she was in the hands of death. By the next day morning, I got the news that she died on the operation table. When the doctor cut her stomach, there was continuous flow of blood which did not stop. The doctor had called a senior professor in surgery and two other doctors immediately. All the 4 doctors tried to save her by giving 14 bottles of blood and the struggle continued for 12 hours before they finally found her soul never returns.

Case IV: We cannot escape from our past karma.

In 1988, I visited a famous Palmist in Rayagada, Orissa. I introduced myself as an amateur Palmist and spent some time with him discussing the subject. Suddenly, he took some handprints from his table and placed before me. He asked me “These are the handprints of a girl aged 26. Her parents want me to predict her marriage date. What can you say?” I observed the marriage lines and said, “She would marry at the age of 29.” He nodded his head and said it was correct.

I observed the whole handprints and found that Mount of Jupiter was strong. I said the girl hailed from a rich family. The prominent Sun line tells that she was very brilliant in studies. He replied, “Yes, she belongs to a very rich family. She is a first rank holder and got a gold medal in her P.G. from Rookie University.” But I was a bit uncomfortable when I found several lines going in different directions in the hands. It looks like a cobweb formation. I expressed my feeling saying that, “This girl would have a severe health problem. But, I am unable to assess what might be the actual the problem.” He said, “Your reading is correct. The cobweb formation of lines is an indication of terminal cancer. Her parents do not know about this. Since it is in advanced stage, the girl will die soon probably within 6 months.”

I went to Andhra University, Visakhapatnam to apply for my P.G original certificates. When some students found me there, they identified me as a Palmist and as previous student and offered me a room to stay. At that night, I was surrounded by many young men who wanted to know their future. I was giving predictions to one by one after analyzing their palms. At around 9.30 at night, a student stormed into my room shouting, “What the hell you people are doing here?” He turned to me, “I came to know that you were our senior and studied science in this University. Are you not ashamed of practicing Palmistry?” Then turning to others in the room, “All of you people should know that Astrology, Palmistry, etc. are just a thrash and we should not encourage such type of bullshit any more.”

I said “Because these people have faith, let them get the benefit. I am not asking any one to come to me.” Then I stopped and looked at his face. I found there was white light shining in his face. At once, I got the picture of full Moon into my mind. Moon represents love affairs and changing affections. So I continued, “Since you came to me, I can give you a prediction. You are now in deep love with a girl. But, there is a confusion in your mind regarding whether the girl is really in love with you or not. Now you can prove my words are wrong.” That young man stopped and I saw his face turning pale in surprise. He quickly walked out of my room.

I was sleeping. At around 1 O' clock in the night, somebody knocked at the door. I opened the door to find the same young man standing at the door. He fell on my feet saying “Punditji, kindly excuse my ignorance. What you said about me is completely right. Now please tell me what happens to my love.”