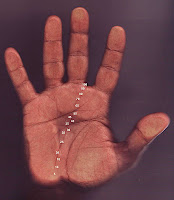 As human beings we need money to lead our life comfortably. To earn money we need a job or profession or we should involve into some business. Such career related issues are clearly represented by the Fate Line in our hands. By observing the Fate Line in both the palms, we can assess when we get the job, when there will be a promotion, when there will be a change in our career and how our earnings will be from time to time. The normal course of the Fate Line. It generally starts any where from the base of the palm and ascends towards the Mount of Saturn under the middle finger.


Nature of the Fate Line:

Timing on the Fate Line:

A straight and long Fate Line starts at the base of the palm and ends at the Mount of Saturn. It will not have any breaks or gaps. This Fate Line assures continuous income for the person till the end of his life. The person is active and earning even in his old age.

A Fate Line without any defects, going straight and ending at the Heart Line indicates the person will have earnings till his 55th to 58th year. I have often verified this type of Fate Line in the people who are in Government service and who get retired at that age. Sometimes, it also indicates failure in love affairs.

There will be wrong judgment on the part of the person. He will see failures because of his wrong decisions, especially after his 35th year of age.

If the Fate Line ends in the center of the palm before reaching the Head Line, it indicates struggle in earnings. The person leads a hard life. There will not be any savings. There will be debts to be repaid.

Fate Line diverting in its course:

If the Fate Line is slightly diverting and moving in another direction, it is an indication that the person leaves the present job and takes decision to join another job or pursue a different career.

Fate Line with a branch going up:

The branches from the Fate Line moving up represent some promotion or benefits in the job or business. The person’s income will increase at that age when the branch is shooting up.

Another line merging with Fate Line:

A line which merges with the Fate Line will strengthen the Fate Line. It indicates that the person will come into touch with another person who will help him in his job or business. The person’s income will increase after this point.

A parallel line to the Fate Line indicates support received from colleagues and friends in the career. It also indicates that there will be some income from another source. Such people do two businesses or some additional part time job. I have verified this in the hands of people where their spouses also earn considerable income.

If the Fate Line starts from Mount of Moon and there is horizontal line on the Mount of Moon, it indicates earnings in a foreign land. The person goes abroad and stays there for a considerable period earning a good amount of money.

If the Fate Line starts from Life Line or from inside of the Life Line, the person will receive constant support in his career from one of his family members or relatives.

Email ThisBlogThis!Share to TwitterShare to FacebookShare to Pinterest
Labels: FATE LINE - UPS AND DOWNS IN CAREER